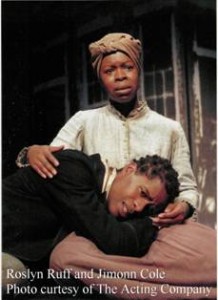 It is the story of the two sons of Judge Driscoll, the chief citizen of Dawson’s Landing, Missouri. Tom is his legal heir and the child of his wife; Chambers is his child by the slave girl Roxy. When Driscoll threatens to sell Roxy’s son , she switches the babies in their cradles. The two boys grow up with each other’s identities – creating a situation both richly ironic and ultimately tragic.

Bruce Weber of The New York Times called this adaptation “skilled and creative . . . Perhaps most impressively he (Charles Smith) has constructed a narrative frame and a plot twist of his own that darkens even Twain’s dark humor. The play’s final moments provide a layer of grim irony that seems eminently suitable to Twain.”