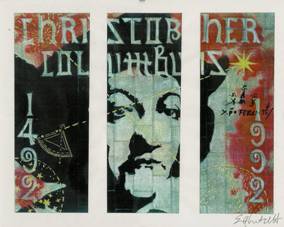 Commissioned by Seattle Repertory Theatre to commemorate the 500th year anniversary of Christopher Columbus’ voyages to the Americas, City of Gold was produced as Seattle Rep’s MOB Show (Mobil Outreach Bunch) and toured the state of Washington in 1992-93.

This play questions people’s perspective of Christopher Columbus; his life, his deeds, and his relationship with the native Taino tribe whose life and customs Columbus documented when he arrived in the Americas. City of Gold explores the idea that Columbus was neither a glorified hero nor an evil conqueror, but a multi-faceted human who was caught in a difficult, complex situation.

The play was written to tour into middle schools and high schools with little to no set requirements.

It was toured with a cast size of five and has been successfully produced and performed with cross-cultural and cross-gender casting.